The Lago-Naki plateau is situated in the heart of the Western Caucasus. It is famous for its grasslands, interspersed with sinkholes, hundreds of flora and fauna species (including rare ones), and well- established hiking routes with breathtaking views of forests and cliffs, suitable for both seasoned mountaineers and novices. Here you can walk, ride a bicycle or even use touring skis. Between tourist spots, you can travel by bus or by car. The average altitude is 2000 m or 6560 ft. 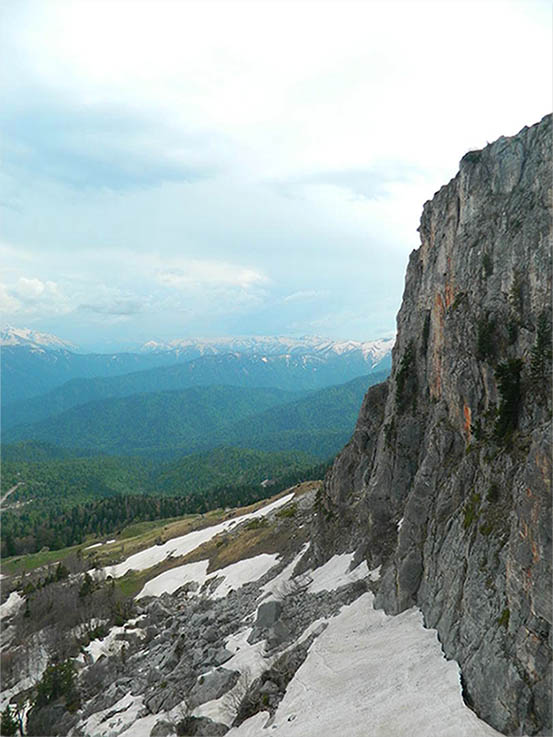 Caucasus Nature Reserve is widely considered the main tourist attraction The Republic of Adygea has to offer. It spreads out over the area of ~1080 sq m in three regions of Russia between the Black and the Caspian seas. A UNESCO World Heritage Site since 1999, it is only partly opened to the public. A zoo, an adventure park with rope bridges for family recreation, and a dolmen museum are situated on its territory. As habitual travelers know, the lighting in different areas of Earth is not the same due to the fact that they receive different amounts of sunlight. Packing your backpack to visit the Caucasus, be prepared for the sharp contrast between the snow- capped cliffs, and the rich meadows of all shades of green — a picture many people think exists only in Photoshop. Lavish forests, which are everywhere in sight, are dark bluish-green with spots of yellow. Thanks to them, the air is magnificently clean and invigorating; it will probably benefit your health more than hundreds of hours in a gym. If you’re lucky, you can see a deer, a bison, a Caucasian tur, a lynx, a horse, a chamois, a lynx, or even a bear. Please be careful not to scare them; they won’t harm you. 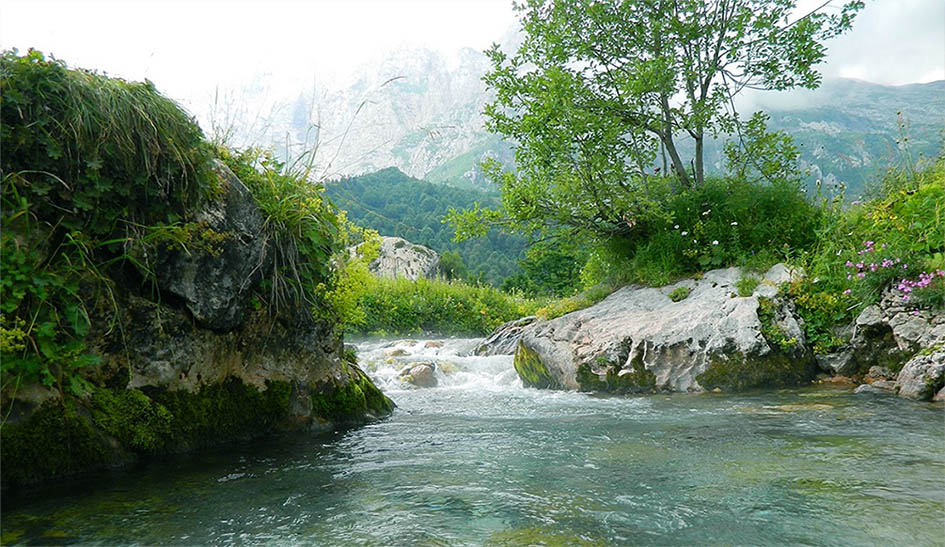 Cascade waterfalls on the Bolshoi Rufabgo River, 16 in total, of various shapes and sizes. Three of the waterfalls have charming names — Devich’ya Kosa (‘Maiden’s Braid’), Serdce Rufabgo (‘Rufabgo’s Heart’), Chasha Lubvi (‘Cup of Love’), etc. The biggest one of the three is Devich’ya Kosa, but it is the second one that is the most famous. Once upon a time, as the legend goes, there lived a giant by the name of Rufabgo. He was evil and never let the residents of the nearby village in peace. But Khadzhokh, the valiant and clever youth, overpowered Rufabgo, ripped his chest open, took out his heart and threw it into the river. The giant’s heart turned into stone, obstructing the river’s way. The place is very clean due to the abundance of bins and (up to Devich’ya Kosa, fifth one from the bottom) equipped for tourists. There are stairs that will enable you to move with relative ease, and railings to prevent you or your child from tumbling into the river below. If you’re tired, there are several places where you can rest. The railings do not obstruct the gorgeous view, so don’t forget your cameras! 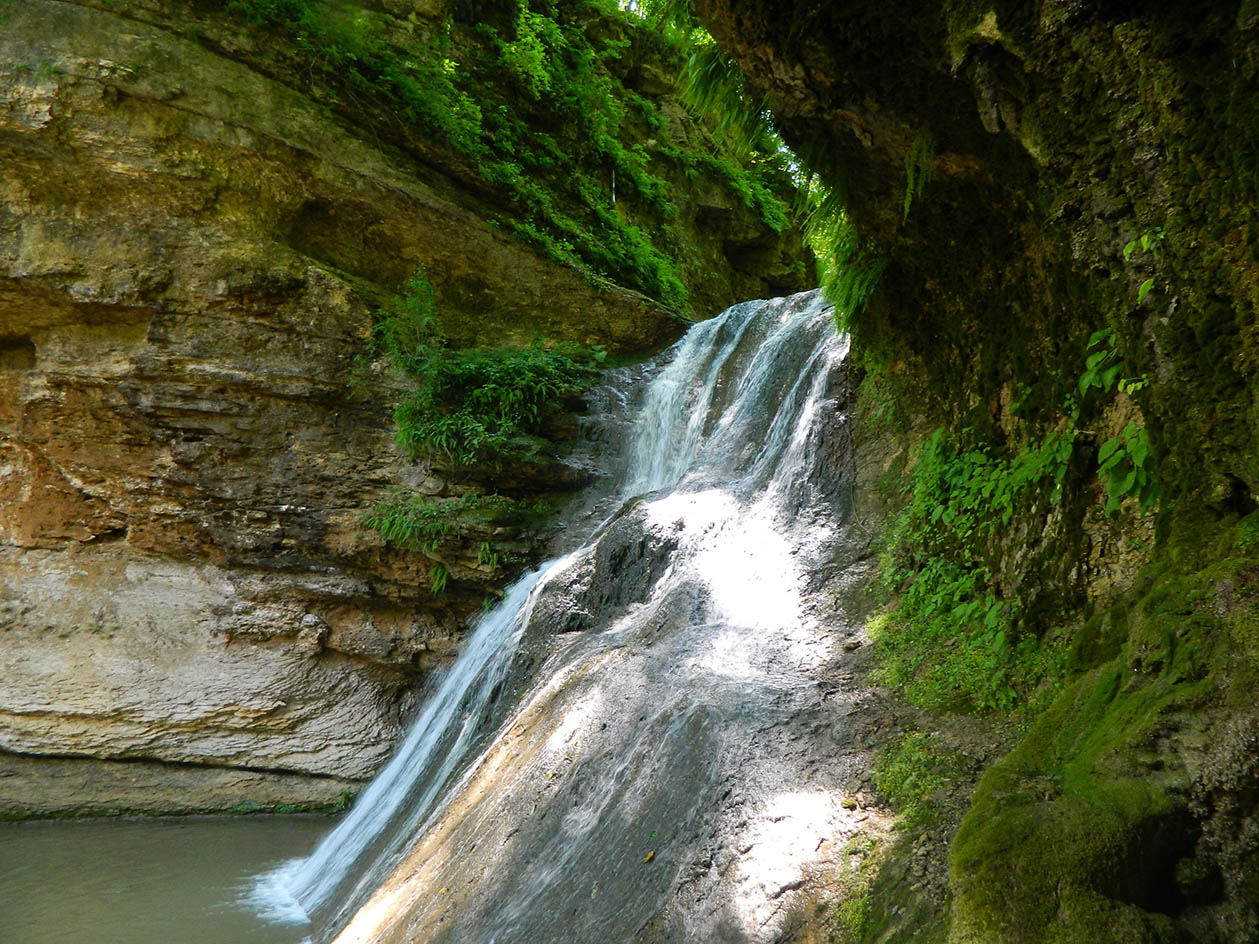 Adygea is the first area in Russia where the forest management is conducted in strict accordance with Forest Stewardship Council standards. A little more than a decade ago, a very interesting project was commenced: each of the Adyghe clans was invited to plant a tree (an oak or elm) in a specifically designated area. On each tree, a tamga (a family seal) was hung. All the families that now have their own trees can be found in the record book. Apart from the ecological significance, the project also has a deep spiritual and historical value. For thousands of years, up until the mid-nineteenth century, the Adyghe people had regarded trees with reverence. Alas, nearly all splendid oak woods the area was so justifiably proud of were burned to the ground in the course of the Caucasian War. Also, about nine-tenths of the people were killed or forcefully relocated. The idea behind the Adyghe Clan Forest is to conjure back the national identity while benefiting the ecology. In 2013, the project received The Russia National Ecology Award. 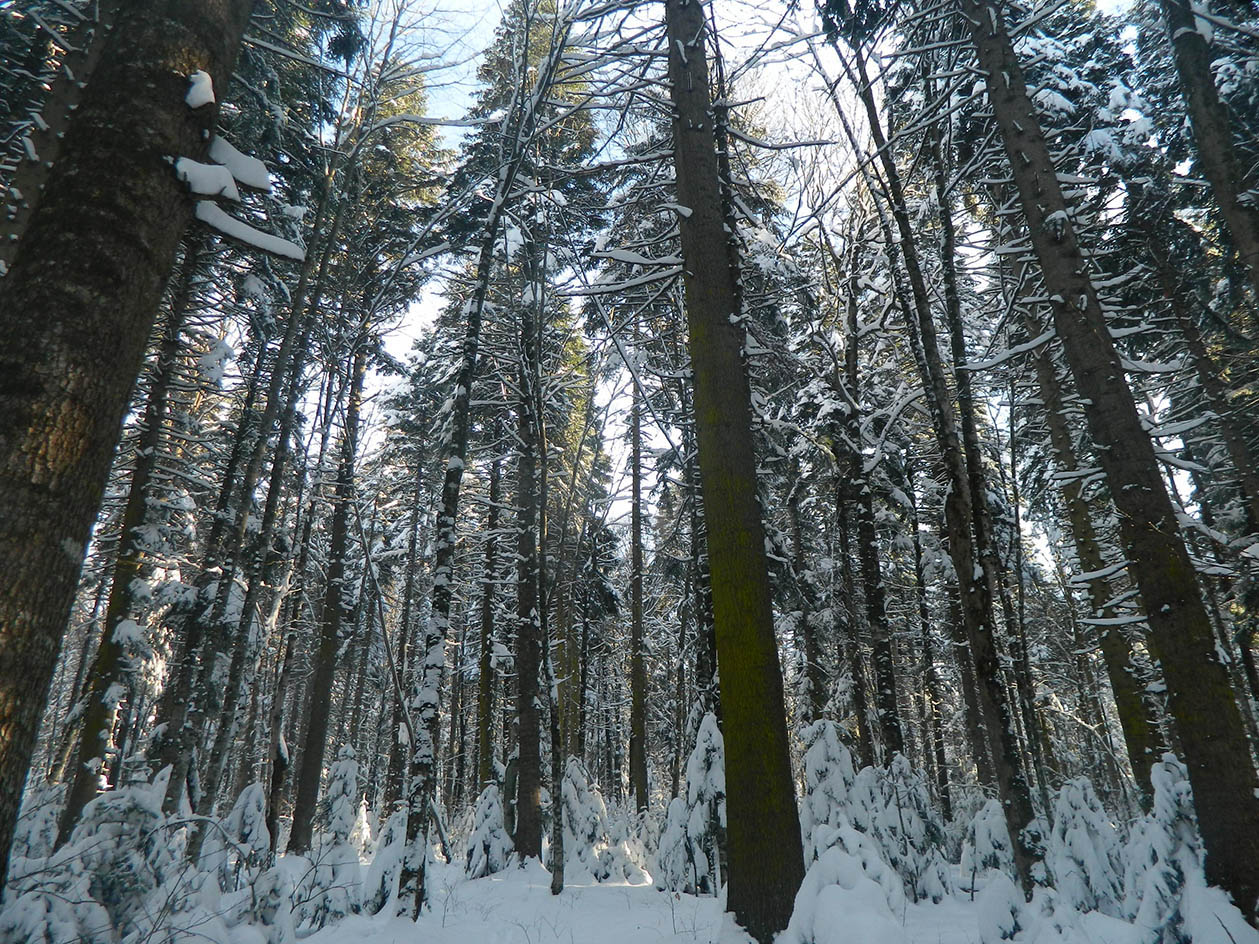 Situated in a small town called Kammennomostskyi, Khadzhohskaya Gorge is perhaps the main tourist attraction in the Republic of Adygea, after the Caucasus Nature Reserve. This truly impressive agglomeration of oddly shaped grass-covered rocks and roaring mass of water of the peculiar shades of deep blue and steel-gray is the canyon of the Belaya (‘White’) River. The gorge is about 500 m (1,640 ft) long and up to 40 m (131 ft) deep. Having passed through it, the river suddenly spreads 50 m (164 ft) wide. Gnarled trees, coniferous and deciduous, surround it on both sides. Overhanging branches shield you from scorching sunshine. Due to that, and the proximity to the water, the air is pleasantly cool here even in summer months, when the temperature is at its highest. Here and there on the banks, wooden figures carved in the shapes of animals and birds can be seen. Hanging bridges and viewing platforms will keep you safe and comfortable while you’re enjoying the breathtaking view. Wooden banks will help you to catch your breath and continue your journey with renewed vigor.

The largest one of the Lago-Naki caves is called Bol’shaya (‘Big’) Azishskay, and if you think that it’s not a very original name, wait till you see it. It is 690 m (2,263 ft) long, but only one-third of it is open to the public. The cave has several tiers, stacked upon one another, and is famous for its exceptional beauty. Large stalactites hanging from the ceiling and the walls resemble Neptune’s beard, and stalagmites, arising out of the floor to meet them like huge teeth. Together they conjure a distinct feeling that you’ve somehow transplanted inside an ancient fairy-tale castle. There are 5 rocky halls in the cave, with romantic names. A wishing tree is in one of them; according to legend, it really works… The cave is well-equipped for walking, complete with railings and electric lights. Cave Nezhnaya (‘Tender’) comes close second in popularity. Once upon a time, a hermit lived here. He’s long gone, but his voice lives in the walls of the second hall of the cave. All you need to do is to utter your question, touch the pendants, and to listen to the echo. The answer will sound inside your head. 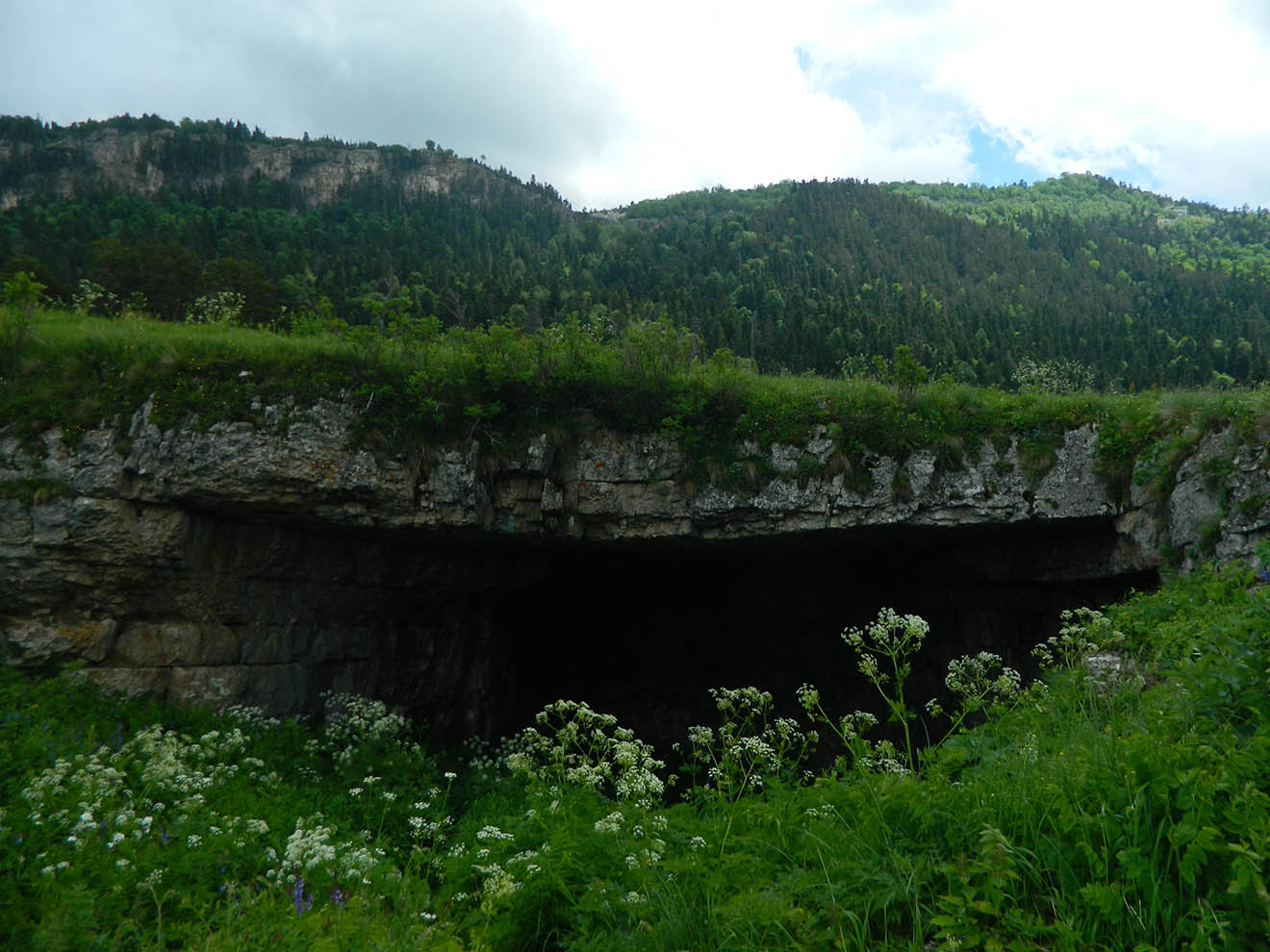 The festival is held once a year in September. All local cheesemakers take part, bringing the traditional Circassian cheese of their own making. It is a mild and high-moisture cheese made only of fresh cow milk molded in a wooden basket. It has a wonderful taste but should be consumed very quickly, as it soon loses its taste due to drying up. The festival involves an engaging program, with talented singers and dancers, and guests from all over the world are welcome. At the X Circassian Cheese Festival last year, the National Museum of Adygea organized an archeological exhibition. The festival lasts one or two days, during which you can taste and buy cheese, and take part in the various masterclasses. Experienced cooks will teach you how to make khalyuzh (a type of cheese-filled pastry, crispy on the outside) and other scrumptious local dishes. Handcrafted items, made by the local masters, can be bought at the festival, too. Besides cheese, Adygea is renowned for its honey, which can be bought in various places on the Lago-Naki plateau.

And that`s not all!

The list of all beautiful places in Lago-Naki is far too long to fit into one page. But we wouldn’t do justice if we fail to mention just a few more. The Stone Sea Ridge, a limestone reef formed over a hundred million years ago at the bottom of what was then the sea, is unforgettable. People keep saying that it looks like something out of space. Sinkholes scattered all over the Lago-Naki plateau strongly resemble craters or amphitheaters. In case you’ve seen all Rufabgo Waterfalls and still want more, you’ll find delight in the trip to the Meshoko River. There is also the Aminovka River, another tributary of the Belaya River, with at least ten waterfalls and three beautiful caves. Seasoned mountaineers can walk about 5 hours to get to the three highest peaks: Mount Fisht (2,867 m or 9,406 ft), Mount Oshten (2,804 m or 9,199 ft), and Mount Pshekho-Su (2,743 m or 8,999 ft). A curious fact: on Mount Fisht, the climatic snowline is at the level of 2,650 m (8,694 ft), which is several hundred ft lower than the Caucasus average. If you love studying local cultures, the International Festival of Adyghe Culture is just what you need.

We’re determined to make your stay a pleasant experience, providing you with the
comforts you're accustomed to, while you're busy exploring the beautiful sights
and observing age-old traditions. There are two kinds of accommodation: 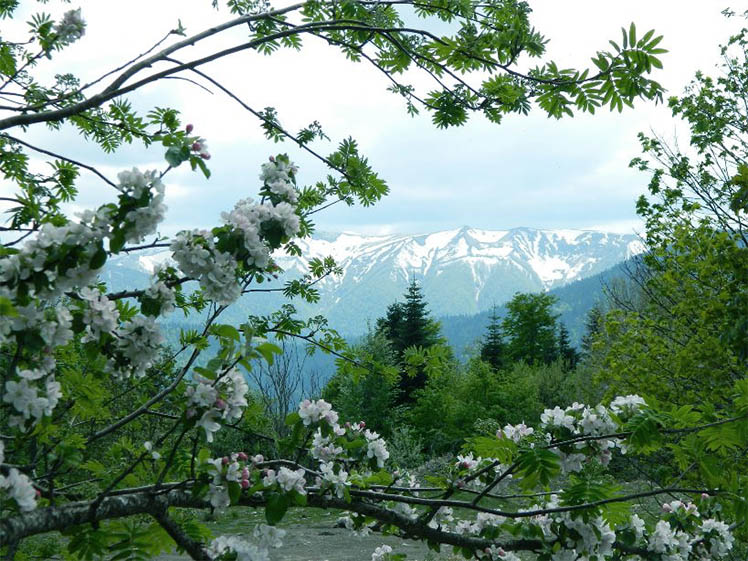 If you’re planning to climb one of the three peaks (Mounts Fisht, Oshten, and Pshekho-Su), you’ll need mountaineering equipment, such as a climbing pack, harness, ropes, climbing shoes, helmets, and other stuff. Please bear in mind that these are no small hills, so you’ll need to be in a good physical form to climb. But if what you have in mind is wandering around and seeing beautiful places, you’ll only need comfortable clothes and footwear. Please be especially careful when choosing the latter. There are stones and roots almost everywhere.

Yes, it is. You’ll be accompanied by our experienced mountain guide, who will show you well-trodden paths that are perfectly safe both for you and the children. We highly value your personal safety and wish that you got home, brimming with wonderful experiences, not worries. And of course, the area is thoroughly mapped, so you won’t get lost. However, that does not mean that you should disregard simple safety precautions. Please listen to your guide carefully and do what he or she advises you to do.

In the hotel, yes. You should remember, however, that in the mountains phones usually go bad. The good old paper map never goes out of fashion here.